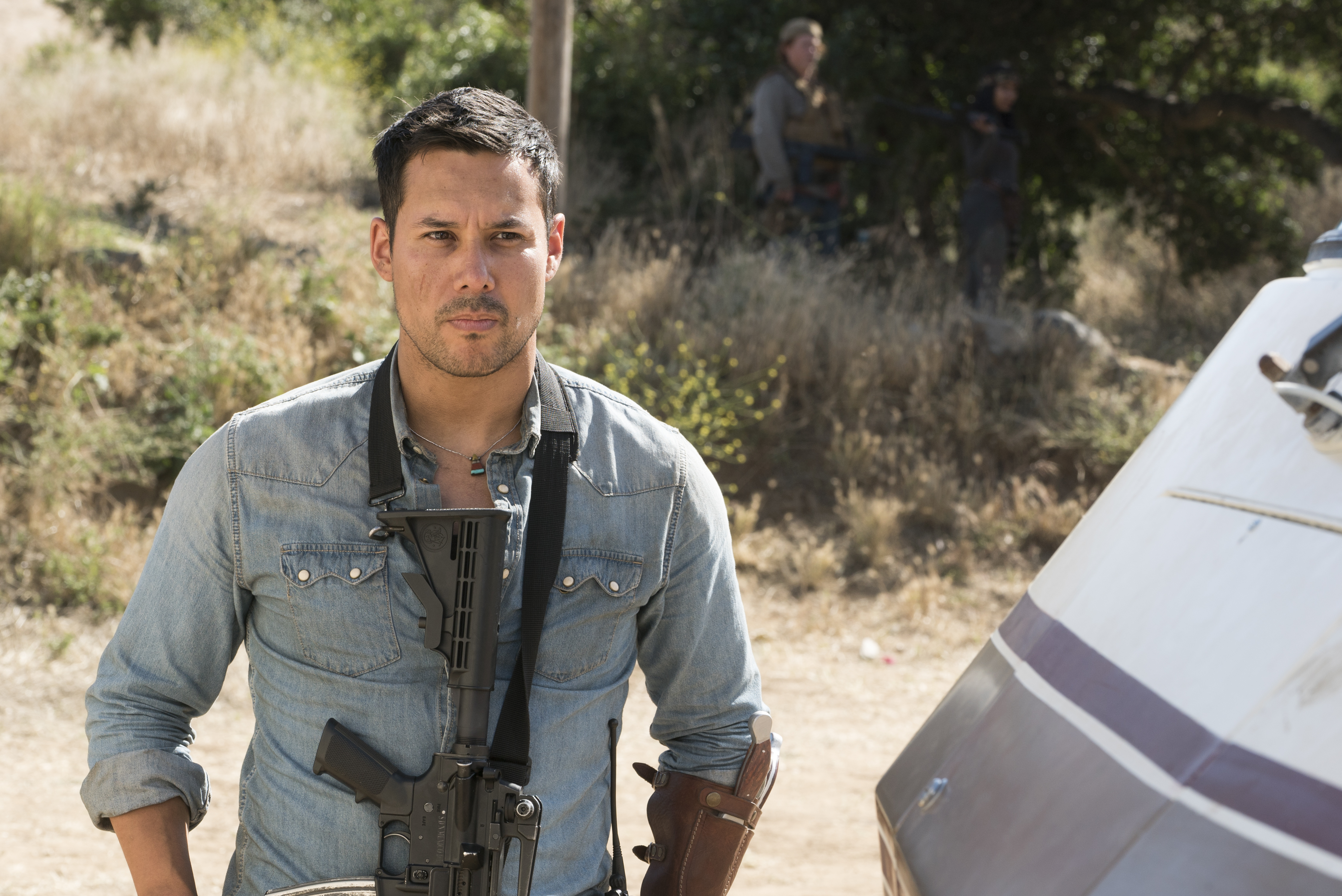 You probably know Justin Rain for his role as Quentin McCawley in the TV series Defiance, or as Alan Frazer in APTN’s Blackstone. Or for his cameo in The Twilight Saga: Eclipse as a Quileute Warrior. Nowadays, you see him play the fearless, yet quiet Crazy Dog on AMC’s The Walking Dead’s spin-off series Fear the Walking Dead. With no doubt in our minds, Rain is on the come up in Hollywood: he’s starring in a few upcoming films and is about to try his hand at directing. We sat down with Rain to talk about his journey of starring in one of the wildly popular tv shows in the world at the moment, how he prepared for his role and how he finds the motivation to keep going.

The Walking Dead series is one of television’s most successful shows ever, and you’re on The Walking Dead’s spin-off series. Congrats on this huge milestone in your career! How did you prepare for your character, Crazy Dog, who had a significant presence in the season?

Thank you very much. It feels nice to be in good company. Funny thing about my character on Fear The Walking Dead, I auditioned for Walker, played by Michael Greyeyes. When my manager/agent sent me the breakdown of the character, I couldn’t help but laugh. They were casting for a mid-late 40’s Native American “leader of the Nation.” I don’t look mid-late 40’s, but the writing was outstanding; it was an opportunity, and it got me excited. So I dove in and did a younger version of Walker [laughs]. I had a lot of fun with the tape; it felt strong, and I was happy with it. Days later my manager told me there was some movement with the tape I sent and that they were considering me for the role. They did eventually go another direction, the right direction in my opinion, and soon after offered me a supporting role: Crazy Dog, who is the right hand for Walker. Working with Michael Greyeyes and the rest of the cast on Fear has been a fantastic time. I made some good friends, and I’m looking forward to whatever else the future holds.

What is the pressure of having a part of a tv show of this magnitude?

I never really thought of it that way. Over the years my work has evolved like any other hardworking actor. I have my days though. There are times where I have to remind myself and calm my insecurities by telling myself “you belong here, Justin. You worked hard, you love what you do, and this is why you’re here.” Every show or film I’ve ever worked on, to me, has just been another opportunity to learn and grow. Try new things, make brave choices and not hold myself back. Each experience has been a new classroom or canvas for me. It’s great to be a part of something that’s done very well and is well received. I have to say, the crew on the series was terrific as well, so a big shout out to all the local crew members; it was a blast working with everyone on the show in front of and behind the camera.

What’s the story of Crazy Dog? He’s so quiet and calm.

From the start, there was no character breakdown for him. So when I first got on set, I guess you could say I just started figuring the guy out along the way. Yes, he is quiet. He doesn’t say much or speaks unless spoken to, but when he does speak it’s of significant importance. Ex-Army sniper. Ex family man. I feel like when Crazy Dog was first introduced to everyone, even myself, it’s assumed he’d be “crazy” in some context. But we learn later on he does have a very steady moral conscience. Feels like the fans are opening up to him as well. There are parts of the character that is very similar to me personally. I’m a quiet person myself. I watch. I listen, and I learn a lot from being this way. I’m also a Scorpio so that may have a lot to do with how I am as well [laughs].

How is Crazy Dog in Fear the Walking Dead different from anything you played before?

Well first off, it’s zombie genre! Who doesn’t love zombie shows [laughs]? Crazy Dog, AKA Lee, also has a military background which is always advantageous, regarding skill set. Lots of weapons handling and shooting is involved in this season, or any season for that matter, which is a lot of fun. The first half of the season when Michael’s character and mine are introduced I don’t say much the first half of the season. I’m Walker’s right-hand man, ex-army sniper, the quiet observer type. It was only after the mid-season premiere that my character started to be more involved with the first storyline. In episode 313, which just aired recently, there was some nice backstory revealed about Crazy Dog and his past after a confined space freak out where Ophelia has to calm him down. The loss of his family when the zombie infection started and his regret and trauma from not being able to save them in time. There wasn’t a lot of dialogue in the scene, but I knew it was an opportunity to bring some depth to the character’s journey. That was probably one of my favorite moments of my character this far.

I’m all caught up on The Walking Dead and eager to see season 8. Big fan! All I have to say is Daryl Dixon! When I was signed onto Fear the Walking Dead, I was very excited to be joining the show. I’m a slight bit introverted, so usually when my agent or manager calls to share the news of a new booking, they typically sound more excited then I do [laughs]. But trust me; I was screaming inside when I got the call. All good things.

We’re so glad to see you on this journey of bringing positive representation of Native people to Hollywood. What’s your motivation?

Thank you for your support. My motivation is to keep creating, keep moving forward and evolving as a person and an artist. I love what I do. It’s nice to release emotions, open up, be vulnerable for my work as an actor. When I have heavy days on set, not just mentally but physically, I do sleep very well those nights. I’ve always held pretty close the message that, if I’m not creating, it becomes very easy to start destroying. Alcohol and drugs are not a part of my life. Through high school they were, and things got very out of hand. That all almost killed me. This month is seventeen years free of drugs or alcohol. My last overdose I had to make a choice coming out of that experience. Live or Die. Had to do a lot of self-inventory as well and realized that I was surrounded by people who were running from their problems too and some of us died because of that. The first sweat ceremony I crawled into was held by some family friends on Standing Buffalo in south Saskatchewan when they had heard what I was battling with addiction. When I came out of that first experience, I don’t know how to explain it but, I felt at home. Probably my first time feeling home. I realized that those substances, those chemicals, the garbage I was using had nothing to do with who I was. Who we were, who we are today, and where we will be generations from now. Every day I don’t drink or use, it keeps me closer to home. Closer to who we are. And I’m stronger because of this.

How inspirational! Do you have any upcoming films or projects? Tell us!

I worked on a few films last year which is in the festival run right now. Mohawk, directed by the fantastic Ted Geoghegan, which we shot in upstate New York via Snow Fort Pictures and Lean On Pete, which is directed by Andrew Haigh via A24. Two films I can’t wait for everyone to see. I’m also prepping to take a swing at directing movies myself very soon. A short film titled Irresolution but I’ll speak more on that at a later date [laughs]. Lots of good things ahead.