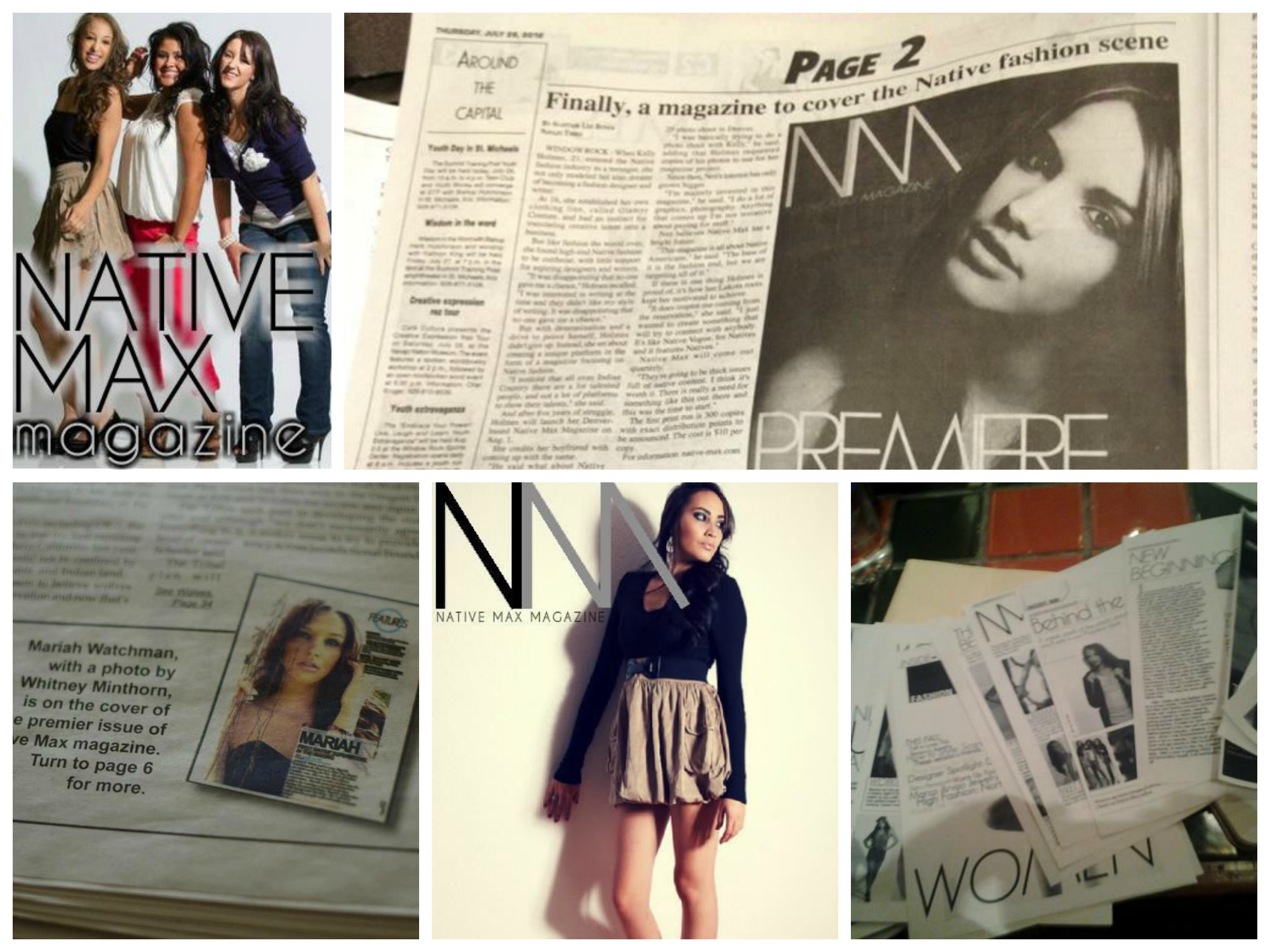 What started as an idea to help promote Native talent is now the popular publication that has taken the publishing industry by storm. Native Max isn’t only a magazine, it’s an evolution. It all started as just a thought –a magazine with Native models wearing Native-designed clothing and articles about Native individuals, one day after school back in fall 2007. To Kelly Holmes, who was 16 years old at the time, this magazine would be an evolution to the growing Native-fashion and entertainment industries, which at the time were hard to break into. Moving from South Dakota to Denver, CO in the middle of high school, Holmes couldn’t seem to fit into her new surroundings. In addition to adjusting to her new school, Holmes faced bullying by girls her age. Holmes, who was an aspiring model and fashion designer, contacted photographers, designers and other models of both Denver and Indian Country to collaborate with, in which she only came up with rejections.

TAKING ACTION
Refusing to be discouraged, Holmes decided to pursue her dream of creating and launching a magazine that would set itself apart from other Native publications, by allowing everyone a chance to be featured, regardless of one’s social or financial status. Holmes wanted to equally cast inspiring individuals to experienced professionals for her magazine, from models, fashion designers and photographers to artists and writers. Holmes wrote her first business plan and detailed plan about how she would set up the magazine’s layout, content and structure of the future team. After five years of attending business classes, entrepreneur workshops, seminars and webinars, Holmes felt she was ready to release Native Max Magazine out of her home in Denver, CO, and their Premiere Issue, set to debut at the end of 2012. On the cover was Mariah Watchman, the first Native American model to appear on popular TV show America’s Next Top Model. Watchman, a member of the Umatilla Reservation in Oregon, was excited to be the magazine’s first cover model. Shortly after the release of the Preview Issue, the magazine’s link was shared all over social media, and views reached to hundreds a day. The release of the Preview Issue certainly caused a stir in Indian Country and received attention from all over the world.

NATIVE MAX, ONE YEAR LATER
Since the release of the Premiere Issue, Holmes and the team launched entertainment website Native Max Drumbeat. The team also successfully hosted two fashion and music events last year in the southwest, with the first annual Native Max Fashion Week currently in the plans for South Dakota. After four issues, the Preview Issue, the Premiere Issue, Winter Issue 2012 and Spring/Summer Issue 2013, Native Max will be releasing the Fall 2013 issue, the anniversary issue.

With the anniversary of Native Max Magazine, Holmes and the team has certainly proved negative critics and doubters alike wrong. Holmes went against the unspoken code of favoritism and featured everyone who had an inspirational story to share. An inspiration to other Native fashion enthusiasts, Native Max Magazine motivated others to create publications that feature Native fashion designers and models.

The idea of Native Max came to a young girl who wanted to relate to an influential magazine, with stories and fashion ideas that she can understand and relate to. Despite endless rejection, Holmes learned to become independent and set out to achieve her goal herself. Holmes hopes to inspire other Native individuals to go for their dreams and turn their passions into something big.

The Timeline of Native Max

This story was originally published in the Fall 2013 issue of Native Max Magazine.