Waylon Pahona, the founder of the Healthy Active Natives Facebook group, is a personal trainer and dedicated runner who’s making a name for himself in Indian Country. He loves to help other Natives become healthier and is always open to sharing his knowledge of healthy nutrition and exercising. However, before creating the HANS group and helping his people, Waylon struggled with his own health issues. Being diagnosed with a disease made him realize the one thing he hated the most, would only help better his life. Waylon shares his story of losing 80 pounds, how he fell in love with running and why you should take control of your health right now.

“Growing up I lived on the Hopi reservation in Arizona. I am Hopi, Tewa and Maricopa. My whole life I was always active. I played football, baseball and participated in wrestling so I was always active all year round. I loved to play sports but I hated to run during practices. I hated running so much I would dodge running by finding every excuse not to run. On the other hand, my girlfriend was part of a long reign of state cross country champions at Hopi High School. I never thought much about running even though it runs deep in the Hopi culture, but I would support her by watching her run. I noticed how all the Hopi parents cheered on their children and it was amazing to see how supportive the parents were and how committed the runners were to finish the races. It seemed like after each run girls would cry, they were always emotional about running and I didn’t understand why. In my opinion I thought these girls were being dramatic.

Fast forward to 2008, I’m still with my high school sweetheart and we have two beautiful boys, 8 year old Jayden and Kaiyou, our new born baby. My wife was working as a youth coordinator for the Gila River Community. I am over 260 pounds, well over my high school weight of 175 pounds. In my mind I thought I was still pretty healthy. I lifted heavy weights, ate everything in sight and still was not a fan of cardio or running. I figured all this heavy lifting and eating was only bulking me up, but in reality it wasn’t. I was consuming way too much calories and was just gaining fat. I didn’t realize how heavy I was until I was squatting a heavy amount of weight one day. Just like any of my other routines I went home after the gym and as I got home I collapsed onto the floor. My back completely gave out and my legs went numb. My wife walked and aided me into the car and took me to the emergency room. When we arrived to the Hopi reservation hospital they felt it was an emergency that I couldn’t feel my legs so they rushed me to a bigger hospital in an ambulance. I was so scared not knowing what I had done to myself.

I spent several hours getting tests, X-Rays and MRI’s on my back when I was diagnosed with Spondylosis and Facet disease, or Spinal Arthritis. The doctor told me that I was way too heavy to be carrying so much weight on my body and that I needed to stop lifting heavy weights. I was crushed by the diagnosis, knowing that the one thing I loved and enjoyed was taken from me. I spent months in physical therapy and as I got stronger, I knew the thing I hated the most, cardio, had to be implemented into my lifestyle to lose weight. I’ll always remember this: I asked the physical therapist if I should start running to lose weight, and he actually laughed at me. He said, “You have a form of arthritis in your back, you’re going to make it worse for yourself. You’re too heavy and it’s not a realistic goal.” I decided to not take his advice as it made me angry that he doubted me running.

On that day I made the choice that I was going to train for the PF Changs’ half marathon. I didn’t even think of starting off with a 5K or a 10k run. To this day I still don’t know why I chose a half marathon, it was a crazy idea but I’m glad I did. I approached my wife about it and told her my goals. She was pretty shocked and amazed that I was interested in doing a half marathon. She was very supportive of me and actually wanted to join me as well, since she lost her running frame of 110 pounds to 180 pounds after having two kids. We started off slow and it was probably the hardest thing I had ever done in my life, since I never ran before. As a former cross country runner my wife eased into it easily and quickly. It took her several months to get back into running while it took me almost half a year to just get a good steady pace. I started to finally enjoy the running. I would go out and run and just think about my kids, my wife and my career as inspiration. I trained and learned a lot from my wife and other Hopi runners.

It was finally time to run the PF Changs’ half marathon and I was ready. I went from 260 pounds to 220 pounds; I lost 40 pounds in training! It was such an emotional day; I couldn’t believe that I had overcome what the physical therapist first said to me. I finished my first ever half marathon in two hours and twenty-five minutes. I was so excited about what I had accomplished, but the only problem was that I was still too heavy and all the training and running put a lot of impact on my knees. I couldn’t run for a couple of months because it was so painful but I eventually realized I was still too heavy. 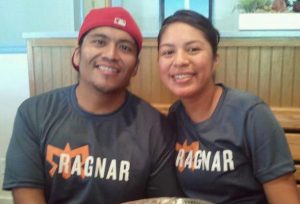 After a few months of resting my legs I decided to enter a 5K run, thinking I was going to do ok since I finished a half marathon. I told myself “I could do anything!” I was last runner to finish the 5K and I was even beaten by an old Native elder. It really discouraged me and made me feel embarrassed. After that I decided to change my diet and educate myself on nutrition and exercising. I even quit drinking alcohol. I loved my friends and my alcohol-filled weekends at the club but I realized I needed to stop drinking if I wanted to be a better runner and be healthier. I noticed I enjoyed learning about the body and weight training. I was always an athlete and realized that fitness was my calling.

I decided to step down as a youth coordinator and become a personal trainer. I realized as a personal trainer I needed to look the part; I wanted people to believe in me. I took it serious and went from 220 pounds to 211 pounds. I felt I was healthier than ever before. My doctor said I was in good shape and from all the training and learning how to get my body in shape, I had prolonged the arthritis in my spine from having any problems. I still wasn’t happy with my running time so I continued to train. The very next year I ran another half marathon in one hour and fifty minutes. From that day on I was hooked on running and realized that I was no longer a heavy-weight lifter. I was more interested in running and training my body to endure long periods of aerobic activity.

I ran several half marathons after that and continued to run in different marathons. I didn’t have a runner’s body as I stood a stocky 5’7” height so I was intimated by the other runners. I then told myself “Why should I pay any attention? I’m doing this for myself and shouldn’t worry about what others think of me” In 2011 I skipped running a full marathon and went straight to training for a 50K marathon, the Paatuwaqatsi: Water is Life run, which is 30 miles on one of the toughest courses on the Hopi Reservation. I trained for hours at a time, running and building up my endurance by thinking to myself about all the changes I made in my life and all the learning experiences I had gained from running. I completed the Water is Life run with a time of six hours and seven minutes. I went from 211 pounds to 180 pounds, and I felt so good to go from my initial 260 pounds to my current 180 pounds. I lost a total of 80 pounds in three years of healthy eating, running and exercise, all from pure hard work. I didn’t take any diet pills or any other fad-diets. To this day, it’s still hard for me to believe that a 13 mile run is part of my training now. I have completed so many races and runs now and have completed three Ultra Ragnar races and two 50K runs. I also completed many traditional runs for prayer and support for Native people in communities. Some days I would cry tears of joy and other days I would cry tears of sadness, thinking of all the negative things that I had overcome in my life. Crying has become a part of my running and my therapy. It made my mind strong and it made me the person I am today. I realized that I am now a runner and applied it to all of my life’s issues; if I wasn’t feeling well I would run, if I knew my family and friends were in pain, I would run and pray for them. I now know why the Hopi girls cried after each run and why they felt so much joy and happiness of running. It takes time and commitment to endure running. I also embraced it as part of my culture and a way of life.”