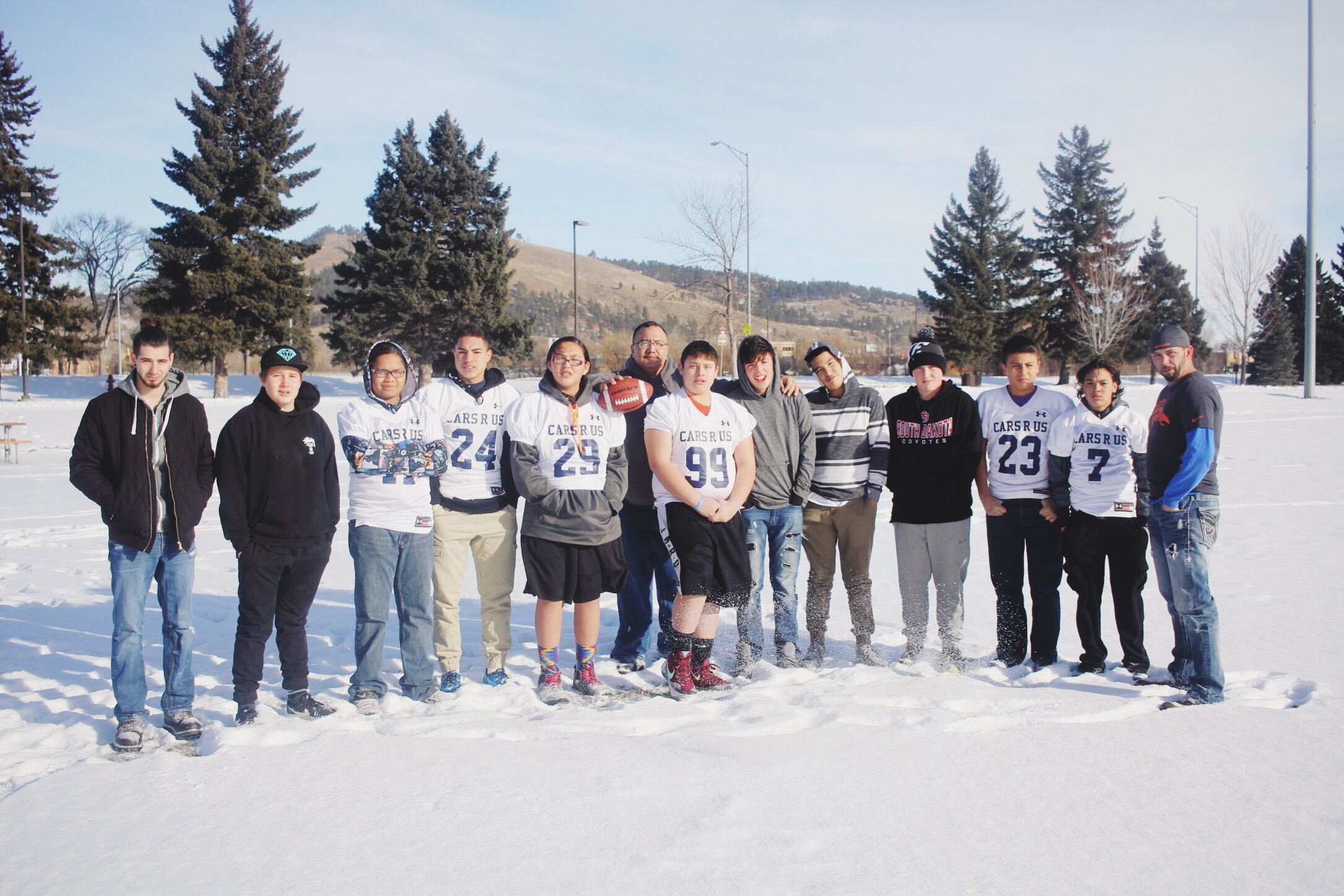 Through a year of racism and tough games that proved their true character, the Black Hills Youth Football League Senior Peewee Broncos football team defied odds. It may just be a sport to others, but to the boys, these are moments that will encourage them to go down the right path. According to an article published in the Rapid City Journal, the city’s local newspaper, nearly 11% of Native American students in the Rapid City Area Schools district dropped out of school last year, compared to 2.4% of their peers. As everyone can agree, Native youth need every opportunity to positively learn and grow. Upon conversing with Coach Langenfeld and Assistant Coach John Frazer, a father to player Malachi Frazer, playing football is guiding them to a positive lifestyle. “I believe they all formed a lifelong bond, improved internally, which translates to life,” explains Coach Langenfeld. “These boys breathe life into me. Keep watching them. It’s worth it.”

It’d be hard to believe the Broncos haven’t won a single game last year. They finished the 2014 season with a 0-8 record. The poor record bothered Coach Langenfeld, not only due to the lack of wins, but because he knew how much others hung their hats on the number of wins a team has; not just the players, but their parents, families, and peers. Furthermore, if their self-worth was tied to the number of wins, then being a loser is what they accept as who they are.

The only boys to return this 2015 season was all minority. Every non-Native kid that played on the team last year went to the schools’ teams instead of rejoining the Broncos. According to one of the coach’s theories, it was due to the fact that local schools are usually notorious for playing white players over Native American players.

However, that didn’t bother coach and he was able to work with a new group of boys who joined the team this season. He also didn’t mind that his team consisted of mostly Lakota boys. “These young men face subtle, and sometimes not so subtle, racism and stereotyping that most of us will never face.” Upon meeting Coach Langenfeld, his compassion is noticeable. He didn’t discriminate or divide the team by color. “These Lakota youth need to see that some wasicu [Caucasian person] see past skin and stereotypes.” He believes due to his different outlook on coaching a minority team, many of the Lakota boys and their families returned to play for the Broncos. He coaches from the heart and loves every single player of the team like his son. “The Lakota understand this” he adds. Instead of fixed on winning, Coach Langenfeld simply focused on trying to teach the boys how to be men. “Parents need ‘wins’ to feel their child is successful. I don’t and the Lakota parents knew why. We’re coaching for the right reasons, which is why we have our talent back.”

One evening in late September, the Black Hills Youth Football League Senior Peewee Broncos football team was set to play against the Rapid City Christian Comets. However, this wasn’t a typical evening or game for that matter. The Broncos were down, but not out. At halftime, Rapid City Christian lead the Broncos, 32-12. They trailed behind the whole game. “We were playing below our capabilities during the first half and into the second half,” explains Coach Langenfeld. “We had made several mistakes that gave up big plays.” Some of the players tried to take the game onto their shoulders, which caused more problems than help. Many of the mistakes in the first half were attributed to players not doing what they were instructed to do.

During the half-time break, most of the boys were hanging their heads and had checked out, according to the coach. “Typically, I’m more of a cheerleader coach, more managing the boys’ heads and keeping them in the game. I reset for this halftime.” Coach Langenfeld knew boys at this young age want to show how they are men. “Even though they are 12 to 14 years old, I used this. I challenged them. We challenged them. If they believe they are men,  they needed to stop acting like kids and man up.” He instructed the boys to stop blaming each other and to just do their jobs instead of trying to play hero. He told them that “The opportunities for success will show”.

But it wasn’t enough, the boys were not rising the challenge and seemed resigned to defeat. The other team scored two more times. Angry and frustrated, the team started to attack each other again in the fourth quarter. Coach Langenfeld called a timeout with 6 minutes left on the clock. “I made them look at the clock. We were down 25 points, with 6 minutes left.” He then asked the boys if they believed in miracles, and told them to make this game the “6-minute miracle”. “We, as coaches, absolutely believe in them; we knew they could win this game.”

Parents were cheering and screaming; horns were honking in the parking lot. The boys were jumping and celebrating. This is the most talked about game to this day. “26 points in 6 minutes; can’t coach that” adds Coach Langenfeld.

The team walked away from the game with more than a hard-earned win. The boys learned how to overcome. “When the world puts its foot to your throat, you knock it off and put your foot to the world’s throat,” explains the coach. “These boys learned to believe in themselves.