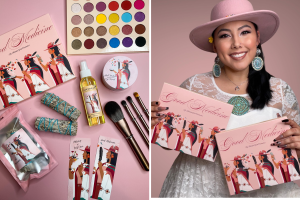 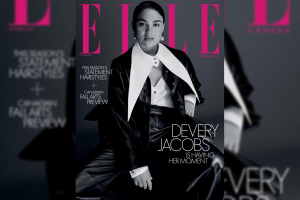 Devery Jacobs on the cover of next month’s Elle Canada 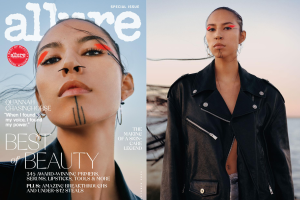 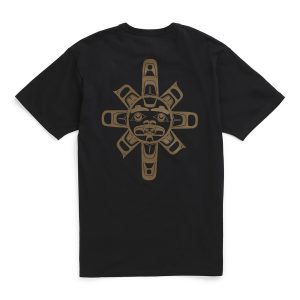 Tlingit Artist James Johnson Collab with Vans on a Collection

The theme for this year’s event: “Native Women En Masse: Harmony through Cultural Identity and Allegiance in Electronic Media” spotlights Native American women who work in the film industry.

During her groundbreaking career, she introduced modern Native fashion to the catwalks of New York, as well as mainstream America through the design competition “Project Runway.” Her “Project Runway” debut in 2012 was a historical first for a Native American designer.

Through her design company, PM Waterlilly, which is named after her Native moniker, she draws inspiration from nature and her Native American roots as she creates a modern Native design. Her designs are inspired by elements such as pottery, the energy of trees, all facets of energy and water.

Beginning with a white bolt of cloth spread over a 7-foot table, Michaels processes the fabric by hand-painting, dyeing, hand-felting or other means of texturizing the cloth, creating statement pieces.

“The way I design is not for the weary,” she laughed, “you have to be prepared to get dirty and put in long hours.”

“What’s important about all of these techniques is, it’s a way of expressing what all of our people have been doing for years. They’ve been creating a use of material that was foreign to them.”

Native people throughout history has pushed the use of materials, such as ribbon, beads, and cotton, she explained.

“Rather than using it the way it was thought to be used, they challenged and cut the ribbon. They took cotton material and (made) beautiful Seminole patchwork. Their use of these materials, they always pushed it. They were very smart and resourceful.”

“I want to use that same kind of mindset that our ancestors used,” she said.

“(Native People) didn’t follow the trends, they were trendsetters. Our trends last the longest – and I don’t want to follow any trend,” she said.

“Natives have always been modern in their design. From the turn-of-the-century up until the 1940s or 1950s, it’s been the same kind of thing. But, it is the longest collection that has ever lasted on the runway. Other collections are over by the next show. Our Native collections have had a long run and they are still running.”

“Our fashion has had a long run because it means something.”

In her first visit to Chickasaw Country, Michaels said she hopes attendees of the film festival and fashion show come away with increased self-confidence, a sense of peace, positivity, and unity.

“I want people to have optimism and know there is an opportunity to continue our voice in numbers. Numbers bring strength to our people.”

Michaels is bringing 12 high-fashion pieces, in sizes extra small to full-figured, for the runway. The clothing she selected for the fashion show is formal pieces designed for events such as walking the red carpet and gallery openings. “Since it’s a film festival I wanted to have the runway more…eventful,” she laughed.

Additional one-of-a-kind pieces will be available at her festival booth, along with an array of accessories such as jewelry, scarves, leggings, tank tops, and t-shirts.

Throughout the year, Michaels offers workshops and maintains a collection at Santa Fe’s True West Gallery.

She has designed uniforms and interior designs for hotels, casinos. Michaels gained national recognition for Peabody Essex Museum show, “Native Fashion Now” 2015 and international attention after receiving the highly prestigious Smithsonian National Museum of the American Indian, Arts and Design Award from the museum board of directors in New York City in November 2014.

She is an alumni of the Institute of American Indian Arts and the Chicago Art Institute.

While in Oklahoma, Michaels will teach a group of budding designers at the Chickasaw Arts Academy in Ada, Oklahoma.