Growing up, I had the difficult task of juggling two distinct worlds: Navajo and American. Along the way, I eventually had to throw queerness into the mix, but before I could do that, it seemed like the rest of the world knew that I was gay long before I could come to terms with it on my own.

Like most queer experiences, I was constantly bullied in school. From my name to my unrealized feminine demeanor to my love of Disney princesses, I became everyone’s go-to punching bag. Also, gym class was hell.

One of my most vivid memories includes a preschool trip to the mall where my teachers gave me the look of disdainful confusion when I wanted to purchase a My Little Pony action figure. They tried desperately to navigate me towards the “boys” section to no avail. As a four-year-old, I never quite understood what all the fuss was about. In time, I understood and I began to suppress that side of me.

Traditionally, LGBTQ+ individuals, or two-spirits, are referred to in Navajo as nadleehi–meaning “one who transforms,” or “one who is in a constant state of flux.” Unlike Western cultures, Navajos do not use subgrouping labels. For us, the queer community exists on the same spectrum moving between or away from the constructed gender binary system.

Even as I listened to my mother tell me stories of the sacred role nadleehi served in Diné society, of why they are revered, I still could not bring myself to tell her, or myself, those three impactful words: I am gay.

It wasn’t until the age of 24 that I finally accepted who I was. Prior to coming out, I had lived a life behind the mask of an overachiever. I excelled in school and joined every organization, from band to student council, just to uphold everyone’s perception of me as the “perfect kid,” as well as to distract myself from my sexuality. Out of sight, out of mind.

When I came out, I had to hit the reset button. Fortunately, my creative side got me through it. My background in music, theater, film, and photography eventually led me to fashion. I always had a love for fashion, but I never pursued it due to a misguided fear of being outed.

In 2012, while working as a freelance photographer, I answered an ad from a Flagstaff designer who needed interns to help with her journey to Phoenix Fashion Week (PHXFW). Since 2008, PHXFW has been providing a platform for emerging designers and models to learn the business side of fashion through an intensive summer boot camp that culminates in a three-day fashion show in the fall. That summer changed my life. I taught myself graphic design, social media, and digital marketing.

Three years later, I joined the PHXFW team as an ambassador in the styling department. Within a year, I moved up the ranks to my current role as Branding and Social Media Leader where it is my responsibility to set the art direction and execute social media campaigns. I also assist in planning our year-round fashion events from start to finish.

Throughout my life, I’ve always made it a priority to include an indigenous point-of-view to whatever I do. Indigenous peoples are largely left out of the mainstream narrative; even in the fashion industry, where there is little to no coverage of the emerging field of contemporary Native fashion.

This oversight motivated me to obtain a master’s degree in fashion journalism at the Academy of Art University, which I completed last May in the middle of the pandemic. Through my studies, I learned additional skills on how to be an effective writer, visual communicator, and stylist. Last fall, I fulfilled a lifelong dream by attending New York Fashion Week where I attended fashion shows and covered my school’s Graduate Fashion Show. My work has been published in Academy Art U News and Indian Country Today.

True to the word nadleehi, I have gone through several transformations in my life and in my career. Working in the fashion industry has allowed me to be comfortable with who I am and to live my truth in style. 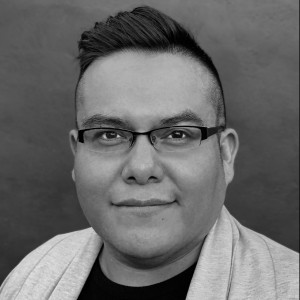 Niya DeGroat (Diné) is a contributing writer for Native Max and the newly appointed Director of Multimedia for Phoenix Fashion Week.