Right now, Janae’s schedule is growing quite full. An interesting photo project in collaboration with someone she greatly admires is in the works for next month. The show she was casted in (lead role), Buffalo in the Room was picked up by a producer in L.A. after it gained some traction in New Mexico. “It had to be revamped, the table read is on July 16, and will now be filmed locally in L.A. by the end of this summer.” She’s currently writing a horror short that she wants to film on her Fort Peck reservation this fall. 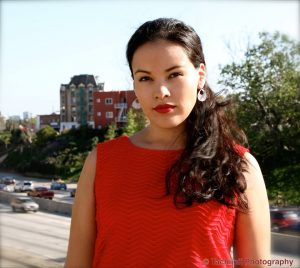 Janae’s style is multifaceted and ever-changing, quite dependant on her mood. One day it’s feminine and boho, with bold-colored dresses. “I can’t get enough of red right now”. Or it can switch to a more masculine feel –motorcycle chic with black on black, leather and Frye boots. After Janae gave up driving a car in lieu of a motorcycle, her style has changed. “You can’t wear flowy, feminine dresses and heels on a bike.” No matter how “moody and interchangeable” her style becomes, Janae always accessorizes with Native pieces, like beadwork or quillwork.

Janae doesn’t follow a set style. To Janae, living in Hollywood allows her to be as creative as possible. “I do and wear what I feel. I grew up on the rez; if you were too “creative” with your style, you’d be ridiculed. I appreciate being able to wear whatever the hell I feel like regardless of style or brands in the city.”

For high fashion, Janae opts for her favorite label, B.Yellowtail by Bethany Yellowtail. She can be seen cruising L.A. on her bike rocking Alano Edzerza.

Along with acting, Janae balances being a mother. “ My son James is my biggest inspiration. He keeps me young, in shape, and optimistic!” Janae admits she can’t be the selfish creature she once was before motherhood, but is constantly subjected to the old-fashioned notion that once you become a mother, it’s over. “ I vehemently disagree. Some people say it’s because of their children they couldn’t. I say it’s because of him I must.”