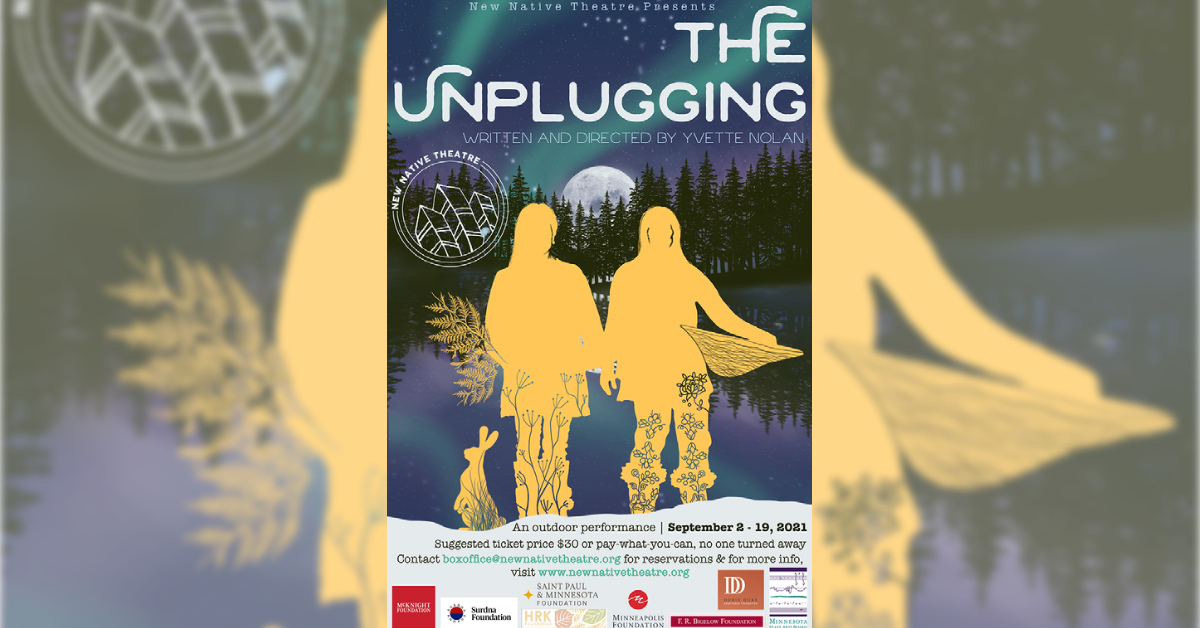 This will be New Native Theatre’s first live performance since September 2019, when they closed their 10th anniversary season with “The Rez Sisters.” Returning to live theatre has been an intentional and long thought out process for the 13-year old company. “Performing outdoors at the former Migizi Communications space is incredibly meaningful for our community. We chose this play about rebuilding, cast with four respected Native female community members, as a way to look towards healing after so much upheaval,” says Artistic Director, Rhiana Yazzie. Migizi Communications is known for having been founded by and guided today by Native female leadership.

After two years of no live performances, the company is investing in its roots of nurturing new talent right from the Minnesota Native community: Christina Woods is a member of the Bois Forte Ojibwe tribe and Duluth Art Institute’s first Anishinaabe Executive Director. Lyz Jaakola, a member of the Fond du Lac Nation is an opera singer and traditional musician and composer teaching at Fond du Lac Tribal and Community College. Both Woods and Jaakola are double cast in the role of Bern, a free-spirited, body-positive elder. Alicia Smith who is Yup’ik from the Pitka’s Point Village in Alaska has found the time to perform with New Native Theatre in her fourth role while her day job is at the Department of Human Services. She is double cast with Alicia Garcia, a member of the Taos Pueblo tribe and a school social worker for the Minneapolis Public Schools Indian Education program. Smith and Garcia play Elena who has adapted easily to survival in the wild, post-apocalyptic world because of her grandmother’s teachings. The cast is rounded out with newcomers, Raymond Niu and Joshua Simpson, both students at the University of Minnesota. New Native Theatre has been seeding the theatre ecosystem with opportunities for emerging Native artists to gain training and learn the craft.

“The Unplugging” tells the story of two Native women exiled from their village because they are past child-bearing age in a post-apocalyptic world where the “lights go out.” They rely on their ancestral knowledge to survive. But when a stranger from their village seeks their help, the women must decide if they will use their knowledge to help the society that rejected them.

All of the actors get the chance to work alongside lauded First Nations director and playwright, Yvette Nolan who is Algonquin. From 2003-2011, she served as Artistic Director of Native Earth Performing Arts. Her book, Medicine Shows, about Indigenous performance in Canada, was published by Playwrights Canada Press in 2015, and Performing Indigeneity in 2016. Her works include the dance opera “Bearing,” and the libretto “Shawnadithit.” She co-created, with Joel Bernbaum and Lancelot Knight, the verbatim play “Reasonable Doubt,” about relations between Indigenous and non-Indigenous communities in Saskatchewan.

Leading up to the production, New Native Theatre has been hosting a summer workshop series focused on food sovereignty and indigenous cultural lifeways such as wild rice harvesting, fish skin tanning, and indigenous gardening practices, and even auntie life-hacks. More details can be found on their website and Instagram account.

Tickets are pay-what-you-can with the suggested price of $35. Audiences can buy tickets at https://unplugging.brownpapertickets.com.

People can actively support New Native Theatre to break down stereotypes and tell stories with authentic Native stories at https://www.givemn.org/donate/New-Native-Theatre5643d2ebdd676.