ADA, Okla. – The beat of the music flows through the audience, shining lights illuminate the stage and hundreds of eyes give undivided attention to the dancer performing an elaborate routine.

The atmosphere is intimidating, yet 14-year-old Chickasaw dancer Paisley Mitchell thrives under pressure.

Her remarkable talent has resulted in her most recent accolade – a national award at the Encore Performing Arts Dance Competition for most photogenic. It means her likeness will be featured on all of Encore’s collateral, advertising, and social media for 2018.

“I was excited when I found out I won,” Paisley said with a smile.

Judged on more than merely appearance, contestants were observed by expert judges during qualifying competitions. Skill, attitude and personality, both on and off stage, were critiqued.

“You have to always give one hundred ten percent to every performance,” she said. 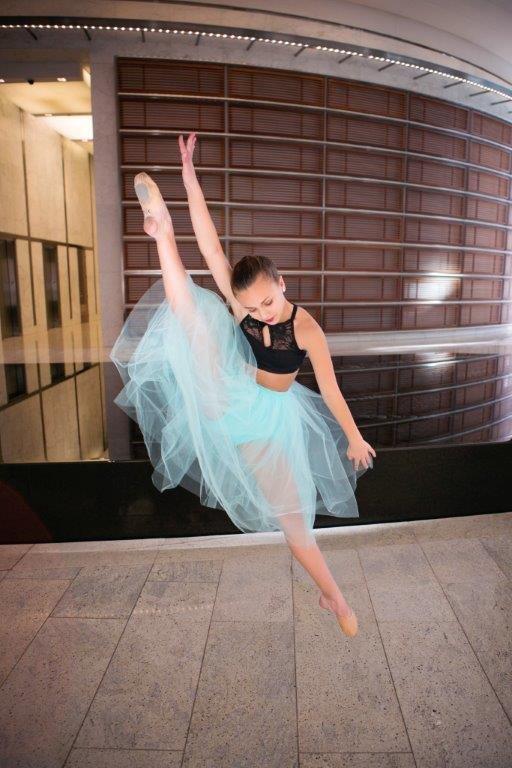 Stepping onto the stage, Paisley transforms from a quiet, sweet teen into a bubbly, sassy dancer with a glowing smile.

Eight years of dancing and six years of competing at the Central Oklahoma Dance Center in Ada have strengthened her love of dance and honed her competitive skills.

Paisley is humble when it comes to her career as a dancer. Trophies, medals, and ribbons, are among honors she has earned by virtue of her vast talent.

“This past year I did eight routines,” Paisley said. “Depending on the level of difficulty, I spend a different amount of time on each routine. I am normally in the studio four days per week. During competition season, I may be in the studio five to six days per week.”

Jazz, hip-hop, ballet and contemporary top her list of favorite dance styles, but street dance has tweaked her interest, too. With each differing style, Paisley is able to fully explore and express herself artistically.

“I love to be sassy onstage,” she said.

When she isn’t perfecting a dance routine or attending school, she devotes time as a student instructor to the youngsters attending the Dance Center.

It is plain to see dance teachers who inspired her have made an impression as role models. Now, she is inspiring beginner dance students to reach for their goals no matter their age.

Her passion has resulted in Paisley moving up to senior level at the Dance Center last year. By dancing with older and more experienced students, she attained a higher standard.

Dance encompasses team and solo performances and Paisley excels in both genres.

“I prefer to perform solo,” she said. “I am able to choose my style of dance and I’m in control of the performance.”

Solo dance allows her true individual talent to shine through, creating a memorable performance, an achievement she alone can be proud of when it’s all said and done.

Paisley has learned much more than dance. Years of dancing require dedication, hard work, and commitment, all life skills she will likely tap as she moves into adulthood.

Paisley’s parents, Jay and Kristi Mitchell, are the definition of supportive when it comes to her dedication to dancing.

“It is very rewarding to see your child succeed in something she enjoys,” Mrs. Mitchell said. “To see her set such high goals and then achieve those goals is gratifying.”

The Mitchells have made sure Paisley is taught everything she needs to succeed, ranging from weekly studio lessons and private lessons, to team training and costume construction.

“It teaches her she can set achievable goals and make them if she tries,” Mr. Mitchell said. “That’s a learning step that we as grownups use.”

More than the awards and recognition, Paisley enjoys dance because it makes her happy. She’s developed a tight support system with her fellow dancers and those deemed as role models.

“My Chickasaw heritage has taught me to be a competitor, never give up and be unconquerable,” Paisley said.

Without a doubt, Paisley is talented. Her graceful moves and maturity accord her steps toward a bright future full of opportunities.