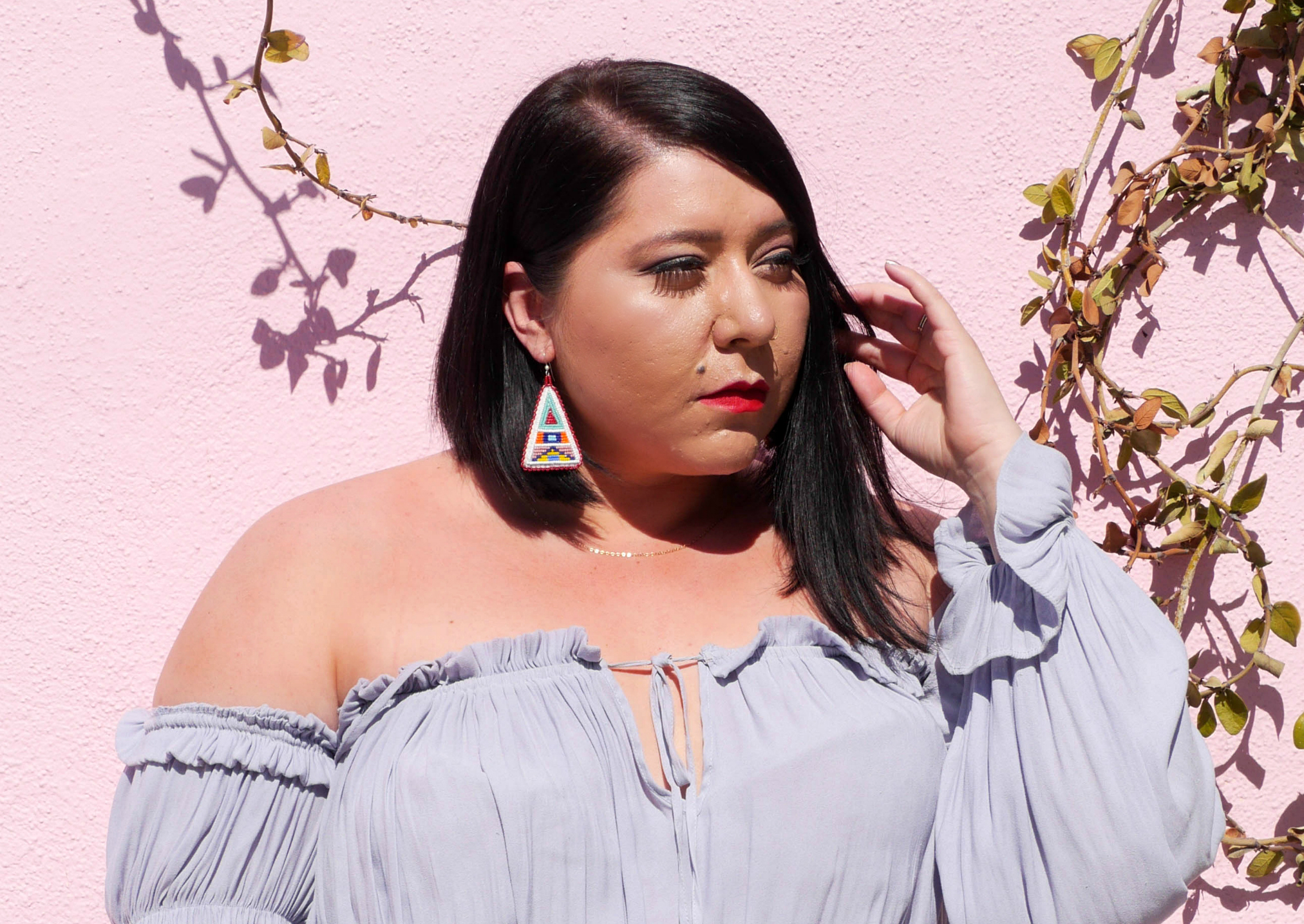 A Day in the Beautiful Life: Bethany Yellowtail

Yellowtail has been interested in fashion since she was a little girl. She grew up on the Crow and Northern Cheyenne reservations in southeastern Montana, where she learned to sew from her grandmother, and learned of making powwow shawls from her aunt. From there, she made her clothes during home-ec class in high school. She admits that there weren’t a lot of opportunities or positive outlets for Native youth. So when she said she wanted to be a fashion designer, everyone gave her the side eye.

Then in 2007, 18-year-old Yellowtail left the rez and enrolled at the Fashion Institute of Design and Merchandising in downtown Los Angeles, California. When asked what it felt like relocating to L.A., she answered, “I felt so out of place, I almost left.” She adds, “Instead I threw myself into my studies.” Yellowtail recounts her arduous journey, which began with living on no money or sleep. She worked at a coffee shop for a year while taking unpaid internships.

Three years later in 2010, Yellowtail landed a temp job at BCBG as an assistant patternmaker. She admitted that working for brands like BCBG was a dream come true, as she wore labels like BCBG growing up. Four years later, she decided that it was time to break out on her own. “There isn’t a brand that I truly identify with except for what I do.” Thus, B.Yellowtail was born.

Yellowtail has accomplished so much in the past few years with B.Yellowtail. Her brand is known for combining Northern Cheyenne and Crow roots with modern silhouettes: silk wrap dresses printed with elk teeth, which are inspired by traditional regalia; flowy blouses and tank tops adorning tribal patterns. In 2016, B.Yellowtail launched B.Yellowtail Collective, a movement in which her company partners with Native American artists who create jewelry, purses, and star quilt blankets and sells their pieces on her website. This is an effort on Yellowtail’s part to give them a platform in an industry that takes their aesthetic and business. “That’s not okay,” she says. “One of the best things about what I do is that I get to share our platform with other creatives and discover the hidden gems in our community.” Yellowtail’s latest release, “SLAY Part 1”, lit social media on fire. The collection, which Yellowtail collaborated with graphic artist Kimberly Robertson with, features a cropped hoodie and bag with “SLAY colonial, white supremacist, heteropatriarchal bullsh*t” on the front.

A significant milestone for B.Yellowtail happened just a few weeks ago when B.Yellowtail announced a capsule collection release with The Land of Nod, the children’s division of home furnishings/design retailer Crate & Barrel. Yellowtail admitted it marked a considerable achievement in the direction of portraying contemporary Native art and design in the fashion industry. “We are finally getting the opportunity to direct the design narrative of our own stories, and being able to bring that to the mainstream retail world is beyond exciting,” she says. The collaboration highlights the Native traditions of celebrating new babies and children with items of cultural and spiritual importance. Items in the capsule collection include wall art, baby apparel, baby blankets, area rugs and traditional stuffed toys.

Today, Yellowtail has garnered a loyal following with hundreds of thousands of social media followers and looks having been worn by big-name celebrities such as Shailene Woodley and America Ferrera. Her pieces sell out as soon as she drops a collection and finds herself featured in mainstream media, like Today.com and People.com. All the success she has so far has inspired Yellowtail to change her goal for her company. Instead of wanting to sell her designs in department stores, Yellowtail now wants to open up a manufacturing company in her homelands so she can employ her people.

There may have been Native American fashion pioneers before her, but Yellowtail is pioneering her path, her way. Relaxed on a white leather couch in the middle of her vibrant studio in downtown L.A., she recalls the hard journey it’s been getting to where she is. “To be honest, sometimes I’ve been afraid to take on the fashion industry in the way I have. It’s a large undertaking, and there is no roadmap for an indigenous brand to succeed while creating real impact. The things I dream of doing, have never been done before, and I acknowledge that I can not do it alone.” But she also remembers the women who support her. “I feel very blessed to have a stronghold of Native women in my life. Through my work and the extended network of Indian country, I always find sisters along the way who rally behind me when I need it most.”

And that’s one thing you need to know about Yellowtail. She’s all about her Native sisters. “Women like Kim Smith, Chelsea Luger, Kahara Hodges, Chrissie Castro, and Jaclyn Roessel are pure magic. I could go on for days about how much love I have for Native women. We are the backbone of our communities, and we need one another.” Yellowtail not only collaborates with Native women artists with her company but she also frequently travels back to her reservation to teach sewing classes. The Native Max cover star reflects on working with Native women and why it’s important to help each other arise and thrive.

Let’s start with your team. Who makes up your B.Yellowtail squad? How do you all help each other?

The full-time B.Yellowtail team is comprised of myself and my business partner Kim Meraz plus our intern Maya Ditloff (Blackfeet). Kim Meraz is my rock and my secret weapon, she’s been with me since B.Yellowtail launched. Kim’s an incredible business savvy powerhouse and is one of the main reasons for the success of our brand. Not only is Kim brilliant in business, but she’s also the epitome of a phenomenal woman. She is mom goals, wife goals, style goals, friend goals, and beyond. I’ve learned so much from her in the 3 ½ years since we began and she has helped shaped me into the woman I am today. She puts a mirror up to me and has helped me see the good, the bad and the ugly so that I can dive in deep and become the best version of myself and create the best.

Maya is a fantastic addition to our team. She’s a student at UCLA majoring in film. Without a doubt, she will be a powerhouse filmmaker. She’s brilliant and goes above and beyond for us.

You were selected for our Native Women’s issue, which highlights and focuses on Native women helping each other thrive and succeed. Are there any Native women who helped you succeed that you’d like to recognize? Or any that inspire you?

Absolutely. First I would like to acknowledge the women who’ve raised me and who keep me grounded. My mother Lena, my aunties, my grandmothers, my big sister Jamie, and many other women like Dewanda, La Rena, Gina, Tazbah, Drelynn, Shailene, and Kiela, who’ve shown up for me in very crucial times of my life. Although I’ve been away from home for almost ten years now, I have an incredible support system, and even when I am by myself, I am never alone.

In fact, much of my inspiration and motivation comes from the women in our communities. The ones who do the hard work without recognition, who stand on the frontlines to defend our homelands, fight for policy change in a system that was not made for us, and the ones who are healing our communities by healing themselves.

How do you collaborate with other Native women with B.Yellowtail?

Every season we collaborate with Native artists, especially other Native women. Tazbah Rose Chavez is a brilliant artist and poet who’s been our creative director for many of the fashion videos and branded content we’ve released. She can articulate female indigenous intelligence in a way no one else can. She’s helped elevate our brand most beautifully.

What does a day in your life look like?

Each day is entirely different depending on where I am in the design or production process of my collections. This week, I was in the full-on creative mode with our newest collaborator, and we came up with the theme for the next season. Some days I’ll be running back and forth from my office to our manufacturer checking on the process, or I’ll be on my computer all day responding to emails and requests. But from the time I wake up to the time I go to bed, two things never change: I pray every single day, and I drink a cup of good fancy coffee; sometimes 2 or 3.

Next month, I’ll be back home teaching a sewing workshop on my Rez then immediately after I’ll fly to Seattle to deliver a keynote speech.

Yes! There is so much creative brilliance in Indian Country, and we have twenty of them who sell on our site, and I am a major fan of each of them.

Of course, I’m also a major fan of designers like Jamie Okuma, Maya Stewart, and streetwear brands like Section 35 and OXDX.

You are a very inspirational person. What is your advice to a young Native girl reading this?

“It doesn’t matter where you come from, and you deserve to dream and have the same opportunities as anyone else. You are allowed.” For me, it took that simple phrase from a stranger to change my life and the way I subconsciously held myself back. Say it out loud and permit yourself. Be fearless! You are capable!

On the day during our photo shoot, what were you up to?

Irene Bedard came to our office to try on dresses for the world premiere of “A Wrinkle in Time.” She was invited to attend by director Ava Duvernay, and she contacted us to style her for the event. I have been a fan of hers since I was a little girl and it was a dream come to true to see Madame President in B.Yellowtail!

Check out the BTS photos of the cover shoot here. 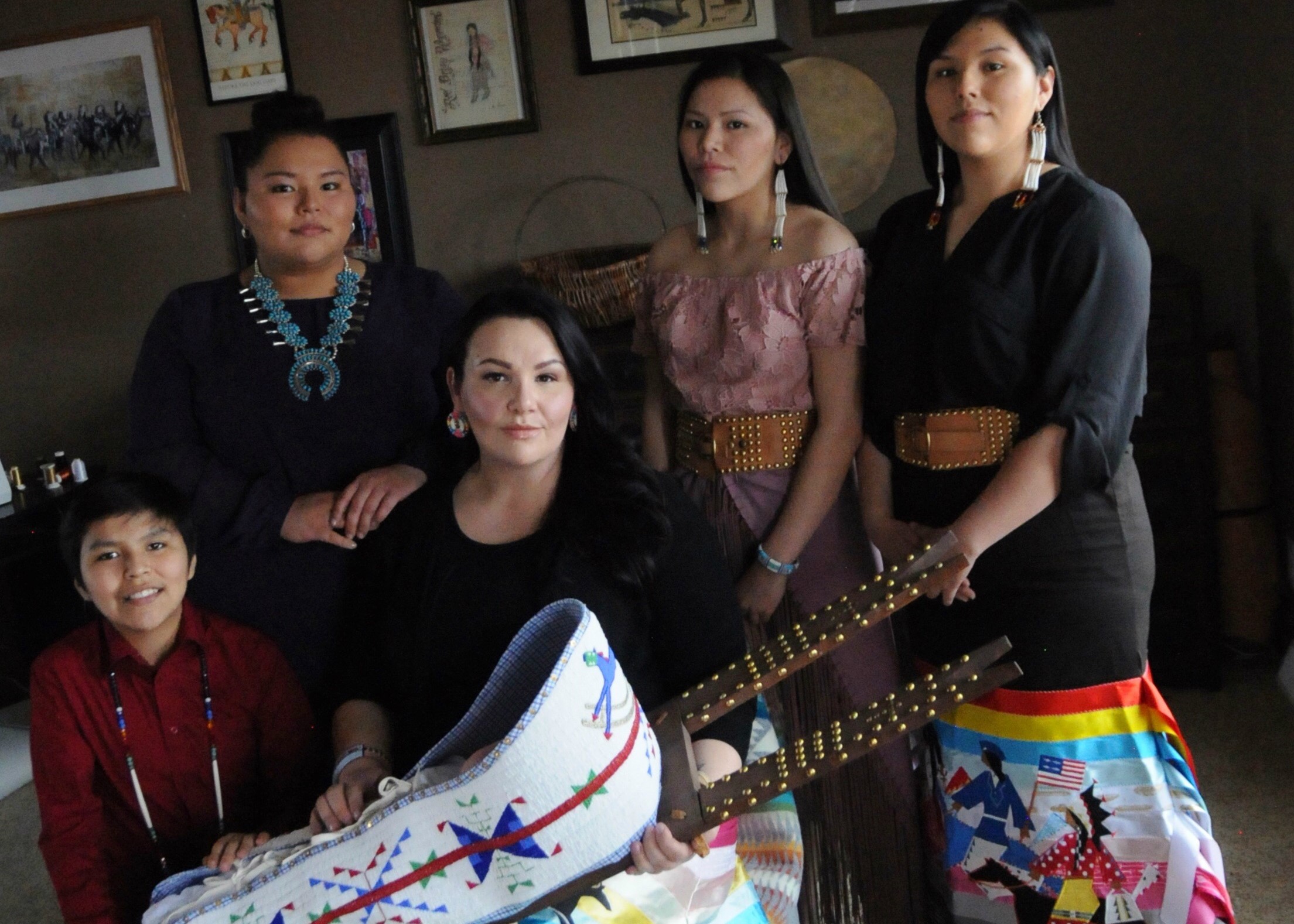 “I want OXDX to become one of Indian Country’s hottest clothing lines. I would like to get to the level of the giants in the

From a young child who dreamed of acting in Hollywood to performing alongside our era’s iconic actors, Grace Dove’s journey has been fulfilling thus far.