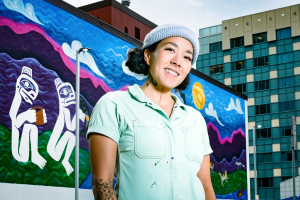 This fall, the Portland Art Museum presents the first major retrospective on Yanktonai Dakota artist Oscar Howe (1915–1983). Organized in partnership with the Smithsonian’s National Museum of the American Indian in New York, Dakota Modern: The Art of Oscar Howe—opening October 29, 2022, and on view through May 14, 2023—features approximately 70 paintings by Oscar Howe lent from museums, historical institutions, and private collections from across the United States, including many that have never been exhibited publicly. Historic photographs, ephemera, film, and graphics will provide context and biographical dimension to the presentation. A multi-authored catalog edited by Kathleen Ash-Milby, Portland Art Museum Curator of Native American Art, and scholar Bill Anthes will accompany the exhibition.

Howe is known both for his bold, modernist approach as a painter and for his defense of the rights of Native artists to choose their own artistic paths. In an incredibly powerful modernist depiction of his Dakota heritage, Oscar Howe brought Indigenous tradition to life with his use of bright color, dynamic motion and pristine line.

An icon and trailblazer, Howe challenged the art establishment’s preconceptions and definitions of Native American painting. In doing so, he catalyzed a movement among Native artists to express themselves with all materials and influences available to them. This legacy of innovation and advocacy continues to inspire generations.

The Portland Art Museum is expanding the reach of Dakota Modern by supporting the creation of a concurrent site-specific installation, They Come From Fire, by artist Jeffrey Gibson (Mississippi Band Choctaw, b. 1972) to be in dialogue with the Oscar Howe exhibition. The installation opens Oct 15, 2022 and runs through Feb 26, 2023. Gibson is an heir to his legacy, breaking down barriers with his dynamic work that combines graphic abstraction and social commentary with Native American art conventions, proving that it is possible to maintain and honor one’s Native identity while having mainstream success. Gibson challenges prevalent ideas about identity, merging Native American materials and forms with those of Western contemporary art in expansive and challenging formats. His multimedia installation They Come From Fire will celebrate Portland’s Indigenous history, presence, and vitality through the use of suspended glass panels, text, and photographic imagery created with Indigenous, BIPOC, LGBTQ+ artists, and other community members on and around the empty monument pedestals in the Park blocks in front of the museum.

These exhibitions will shine a spotlight on two important Native American artists, as well as the broad and lasting impact Oscar Howe has had on modern and contemporary art. Through our community partnerships and public programs, we aim to amplify the contributions and perspectives of both Howe and Gibson, as well as the many Native American artists and communities living and working in the Pacific Northwest.

The retrospective exhibition traces the artistic development of painter Oscar Howe (1915–1983). The arc of his career began with early conventional work created while he was in high school in the 1930s and continued through the emergence of his own innovative and abstract approach to painting in the 1950s and 1960s. Before coming to Portland, Dakota Modern: The Art of Oscar Howe originated at the Smithsonian’s National Museum of the American Indian in New York, where the exhibition is on view through September 11, 2022, and has received critical praise. “Really, go see,” wrote The New Yorker critic Peter Schjeldahl, calling Howe “a frequently misunderstood American master.”

One of the 20th century’s most innovative Native American painters, Howe committed his artistic career to the preservation, relevance, and ongoing expression of his Dakota culture. He proved that art could be simultaneously modern and embedded in customary Očhéthi Šakówiŋ (Sioux) culture and aesthetics—to him there was no contradiction. Howe challenged the art establishment’s preconceptions and definitions of Native American painting. In doing so, he catalyzed a movement among Native artists to express their individuality rather than conforming to an established style that limits artistic expression. His legacy of innovation and advocacy continues to inspire generations of Native artists to take pride in their heritage and resist stereotypes.

Dakota Modern was developed in collaboration with the Smithsonian’s National Museum of the American Indian and curated by Kathleen Ash-Milby (Navajo Nation), Portland Art Museum’s curator of Native American art. “We are finally at a point in the 21st century where we can recognize the impact and complexity of Oscar Howe’s incredible work as both Native American and modern American art,” Ash-Milby said. “This project is a long overdue recognition of his contribution to the field that we hope will establish Howe’s rightful place as a 20th-century modernist.”

Jeffrey Gibson: They Come From Fire

An immersive, site-responsive installation by multimedia artist Jeffrey Gibson, They Come From Fire will transform the exterior windows on the facade of the museum’s main building as well as its two-story interior Schnitzer Sculpture Court. This dynamic work will celebrate Portland’s Indigenous history, presence, and vitality through the use of suspended glass panels, text, and photographic imagery created with Indigenous, BIPOC, and LGBTQ+ artists, and other community members on and around the empty monument pedestals in the Park blocks in front of the museum. Coinciding with a survey of Dakota modernist Oscar Howe, the installation will serve as a bridge between the museum’s contemporary and Native American art collections.

Gibson, a member of the Mississippi Band of Choctaw Indians and of Cherokee descent, is forging a multifarious practice that redresses the exclusion and erasure of Indigenous art traditions from the history of Western art as it explores the complexity and fluidity of identity. His artworks foreground affinities among patterns, colors, and materials long used in Native American art and those characteristic of contemporary Western and global art traditions.

For this project, Portland-based Bullseye Studio is fabricating 12 kiln-formed and laminated glass panels representing 12 different artworks, each measuring 45 by 55 inches and approximately eight-tenths of an inch thick. Each glass panel will be composed of two 9mm kiln-formed glass art layers laminated together. Bullseye Glass Co. has been hand-casting colored glass since its founding in 1974. Their Bullseye Studio collaborates with artists, architects, and designers from around the globe to fabricate art glass for the built environment, including architectural, landscape, and product designs; public art projects; and art installations.

As a fundraiser to support the production of Jeffrey Gibson’s multimedia installation, the artist produced a limited edition print with Mullowney Printing Company in Portland. The edition of 50 prints, titled They Come From Fire, is a multilayered offset relief print on several layers of handmade Japanese-colored gampi paper. The final layer is screen-printed gold ink flocked with metallic mica to add shimmer to the text. A limited number of prints is available for sale now.